This article was published on December 11, 2018 and information contained within may be out of date.

Final preparations are being made for a free Christmas community lunch in Spilsby – and there is still a chance for you to go.

On Friday, a real 6ft Christmas tree donated by Bells Nursery Outlet of Benington was trimmed with the help of the Mayor of Spilsby Councillor Mark Gale and Town Clerk Bonny Smith – and given pride of place on the balcony of the Franklin Hall, where the meal will be held.

It was collected by a driver from Jackson Building Centre in Spilsby earlier than the event on Wednesday, December 19, so all of the groups using the hall can enjoy it on the run-up to Christmas.

The four-course free meal for 60 elderly and vulnerable people is being organised by the Spilsby Standard with the support of a number of community groups in the town – including Spilsby Christian Fellowship, the New Life Centre and Spilsby Good Neighbour Scheme.

Local businesses are also supporting the event, including the Bijoux Cafe, who have offered to bake fresh mince pies for the tea and coffee after the turkey dinner with all the trimmings and pudding.

The rest of the food for the meal is being sourced by Standard charity partners Buckingham Emergency Food and Sainsbury’s of Spilsby – and prepared by a team of volunteers, including members and friends of Spilsby Christian Fellowship and the staff of Eresby Hall care home. Wine will also be served with the meal with non-alcoholic options of preferred.

There will also be a free raffle and entertainment by the Spilsby branch of U3A choir.

At Friday’s tree trimming, Councillor Gale said he was very excited about the event. “We want to thank the Standard and the community groups, businesses and volunteers for coming together to hold this free community meal for the elderly and vulnerable in our town.

“We have plenty of volunteers so no-one need feel worried if they are on their own – there will be plenty of people there to welcome them and make them feel at home. And for those who would have difficulty getting there transport can be arranged.

“We are all very excited – it’s going to be a wonderful event.”

The meal on Wednesday, December 19, starts at 1pm for 1.30pm. Anyone who would like to attend should call Chrissie Redford on 07774326173 to book a place and/or arrange transport. You could also support the event by donating a raffle prize. These should be dropped off with the town clerk Bonny Smith at the Franklin Hall in Halton Road. 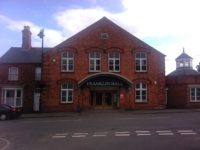