Following a taster session by Bell Ringers from Coningsby at the Parish Church in Old Bolingbroke last Easter, a number of locals expressed an interest in learning to ring the Church Bells and form a local band.

The bells haven’t been rung regularly at Old Bolingbroke for many years. With the continued assistance of the Coningsby ringers, a team of around ten learners have been trained to ring the ancient bells, and are now at a stage where they can ring for Sunday services.

The recruitment of these new bell ringers coincides with a national initiative to recruit some 1,400 new ringers in memory of the centenary of the end of hostilities of the first world war. This number being the estimated number of bell ringers who died in the conflict.

The ringers are to join ringers across the world on Armistice Day this year, ringing the bells half muffled in the morning and open at 12.40pm.

The band are very proud to be participating and have received many good wishes from other villagers who very much appreciate the return of the sound of bells in the village.

March 26, 2022
Spilsby getting ready to be illuminated for Light Night

Spilsby getting ready to be illuminated for Light Night 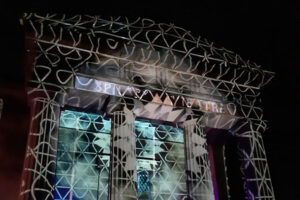